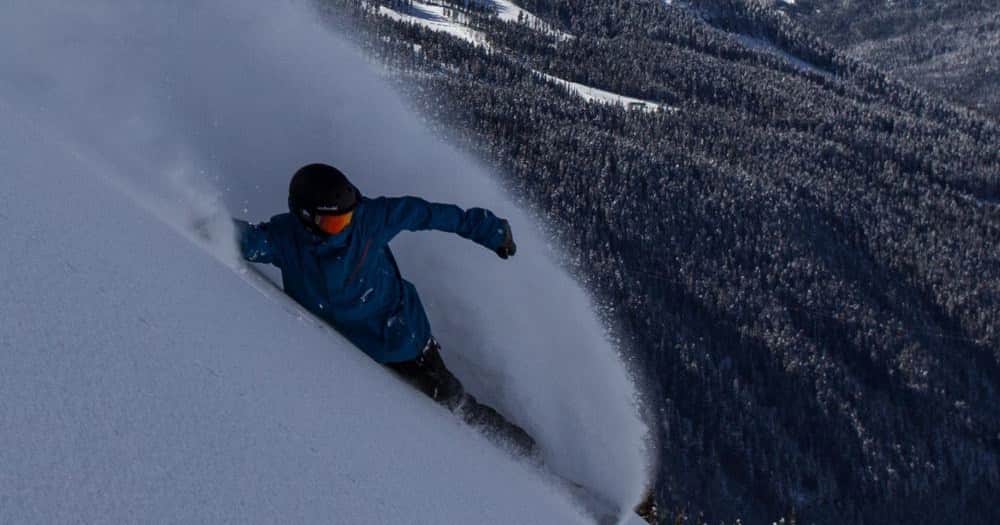 Snowboarding is a sport that captures people’s imaginations. Over the years, so many people living far away from the mountains have seen photos and videos of snowboarding and dreamed about taking part.

It’s an incredibly fun sport and ripping through powder on a snowboard is as good as life gets. However, you’ve got a ways to go before you can get to that point. It all begins with proper training, which means avoiding these rookie mistakes when learning to snowboard.

 While snowboarding is still a popular activity, it’s not nearly as common as skiing is with the general public. This is puzzling, since there are so many reasons to give snowboarding a try.

Yes, it’s challenging to learn in the initial stages. If you’re not well-balanced, it is more likely that you will fall than if you’re skiing – but stick with it. Once you grasp the basics, the learning curve gets easier and you could soon be charging the mountain sideways. If you’re still on the fence or need a little more encouragement, here are a number of reasons people choose to snowboard:

Few things are more exhilarating and adrenaline-inducing as flying down a snow-covered slope on a snowboard, especially if it’s covered in two feet of fresh powder. It’s actually rather peaceful too, with little friction and it’s amazing how you can simultaneously feel so relaxed and energised.

Snowboard boots are considerably more comfortable than most ski boots. Riders will often look at skiers in their hard plastic boots and wonder why they bother – they are hard to get on and off, a pain to walk in, and for some people with badly fitted boots, a pain to ski in, too. Although snowboard boots are stiff and people are surely happy to get them off at the end of the day, they are much friendly on the feet.

For experienced skiers, snowboarding opens up a new world of possibilities. It can turn familiar slopes into new adventurous playgrounds and give you a new perspective on playing in the mountains.

“The attraction of snowboarding is the freedom it gives you,” pro snowboarder Jeremy Jones once eloquently put it. “With a snowboard on your feet the sky is the limit. You can do anything and go anywhere.”

9 Mistakes You Don’t Want to Make

 Who wouldn’t want to learn how to snowboard after hearing those reasons? If you’re ready to give it a shot, you’ll want to remember a few things. This list isn’t meant to intimidate you, but rather to make your first few times on the slopes more safe and enjoyable. Here are some of the top mistakes you don’t want to make:

1) Not taking your time

Regardless of whether you have lots of skiing, skateboarding or surfing experience or none at all, you can’t rush into snowboarding. It’s a different sport and takes time and patience to perfect. However, if you’re willing to give it the time and attention it needs, you’ll be rewarded. Once you hit that breakthrough point, things move very quickly in a positive direction.

2) Not being in shape

Snowboarding is a very physically demanding sport. From the outside looking in, it may look like you’re just gliding down a slope. The reality is that you’re using almost every muscle group in your body to shift weight, turn, stop, and balance. It’s important to have some level of strength and endurance built up before spending time on the slopes. Like all sports, the fitter you are, the further you will improve.

Nothing is more obvious than a beginner trying to fake it. Everyone remembers their first few times on a snowboard, so don’t worry about it. Focus on yourself and give it your best shot.

4) Standing up while strapping in

One of the more common mistakes is related to how you fasten your feet onto the boards. While many experienced snowboarders stand up, you should not attempt this. Instead, sit down while fastening your feet and then stand up. This will keep you from losing balance and falling down the slope or getting hurt while just putting on your gear.

5) Catching your fall with your hands

You’re going to fall on your first few rides – there’s no other way around it. When you do, try not to attempt to break your fall with your hands (you may end up breaking your wrists instead). Let your clothing and the snow cushion your fall instead. It may seem unnatural, but it is often the safer option.

It’s very important that you wear the right clothing; however, very few beginners get this right. Start with a base layer to keep you dry, add a mid-layer to keep you warm, and an outer layer to break the wind and keep out moisture. You should be prepared for severe weather, but you will probably get pretty warm while you are learning to snowboard, especially the first couple of days.

7) Not getting professional lessons

You have three options when it comes to learning how to snowboard. You can (a) attempt to teach yourself, (b) have a friend show you the ropes, or (c) get professional lessons. The first option won’t work, while the second may get you started (but probably won’t give you the necessary skills and techniques). The third option is the best one, as you need a solid understanding of proper form and technique if you want to get to a decent standard.

8) Going out on your own

You should never go out on your own as a novice snowboarder. Even if there are other people on the slopes, you need a friend, partner, or instructor nearby to keep an eye on you and be your “buddy”. Hopefully nothing happens, but it’s always better to be safe than sorry.

Snowboarding isn’t the most difficult sport in the world, but it does take some perseverance to carry on and get through the stage of falling over a lot in the first few days. Try not to get frustrated and understand that all the guys rushing past you have experienced the same problems while they were learning.

Take the Next Step

 At ALLTRACKS Academy, we love everything about the snow. Whether it’s skiing or snowboarding, we’re always ready to have a good time on the slopes. We also believe that there’s no better place to learn than Whistler Blackcomb, Canada.

Although our snowboard courses are not designed for beginners, you do not need to be an expert to join us. If after learning how to snowboard you feel like you’ve found your new calling, please don’t hesitate to contact us. We offer a number of unique ski and snowboard courses, instructor internships, improvement courses, off-piste training, and more. We would love to discuss our options and help find a course that suits you best!